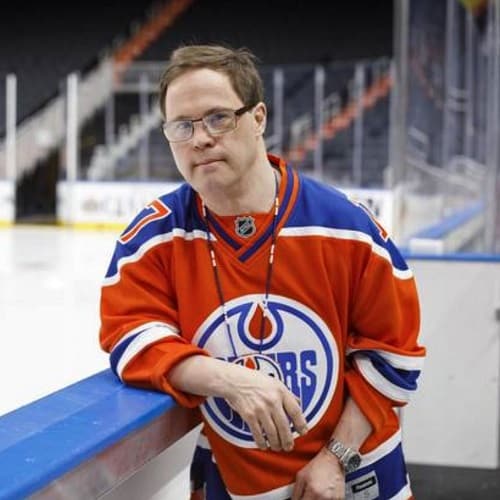 EDMONTON — Joey Moss — a legendary locker-room attendant for the NHL’s Edmonton Oilers and CFL’s Edmonton Football Team — has died. He was 57.

The Edmonton Football Team confirmed the death on Monday by saying the city has lost a “hero.” No cause of death was given.

Moss was born in 1963 with Down Syndrome, the 12th of 13 children to Lloyd and Sophie Moss.

He became the Oilers’ locker-room attendant in 1984-85 when superstar Wayne Gretzky was dating his older sister, Vikki. Moss joined the Edmonton Football Team in 1986 and held roles with both organizations for over 30 years.

“Janet and I are profoundly saddened to learn about the passing of Joey Moss. Not only was Joey a fixture in the Edmonton dressing room, he was someone I truly considered a friend — a friendship that spanned over 35 years,” Wayne Gretzky said in a message posted to the Wayne Gretzky Estates Winery & Distillery Facebook account.

“Joey was not only the spirit of our team, but of our community too. We will miss you Joey and you will always live on through all the memories you have given so many people. Our thoughts are with all of Joey’s loved ones.

“Joey, once an Oiler, always an Oiler — you will always be one.”

Moss worked with the CFL club from the opening of training camp in June until mid-August, at which time he headed over to the Oilers locker-room for the NHL season — capturing the hearts of Edmonton sports fans along the way, particularly with his enthusiastic participation in the national anthem before the start of every hockey game.

Moss helped the training staff with such tasks as filling water bottles, laundry and equipment duties, but became more than an attendant over the years by providing inspiration to everyone in the locker-room.

“Joey was an amazing person whose true passion and dedication to the Oilers organization, players and love of the game touched countless members of the hockey community. Joey’s legacy is not only in the locker room but throughout all of Oil Country. He will be forever remembered for the amazing impact he has made on so many people along the way. We will miss you Mosser — a true champion.”

Moss was awarded the NHL Alumni Association’s “Seventh Man Award” in 2003, for those “whose behind-the-scenes efforts make a difference in the lives of others.”

In October 2008, Moss was honoured with a mural in Edmonton for his service with both clubs. In 2012, he received a Queen Elizabeth II Diamond Jubilee medal honouring significant contributions and achievements by Canadians, and was inducted into the Alberta Sports Hall of Fame in 2015.

“The entire Edmonton Football Team organization is deeply saddened to learn of the passing of Joey Moss,” the club said in a release.

“Edmonton lost a hero today. Joey’s bravery, humour, strength, work ethic and perseverance in our dressing room and in our community left indelible impressions that will live with us all. More than that, Joey endeared himself to everyone in our province, our country and beyond, no matter who they were. He was a symbol of what true teamwork is comprised of and we are all better for having known him. He touched us all.”

Moss also inspired the Joey Moss Cup, an annual tournament held at the end of every Oilers’ training camp.

“Heartbreaking to hear about Joey Moss passing away. He is the soul of the (Oilers),” former Oilers captain Andrew Ference said on Twitter.

“I’ll remember him singing the anthem w/pride, getting fired up about wrestling and always asking if I combed my hair with a pork chop. Broken heart. My deepest condolences to the Moss family.”