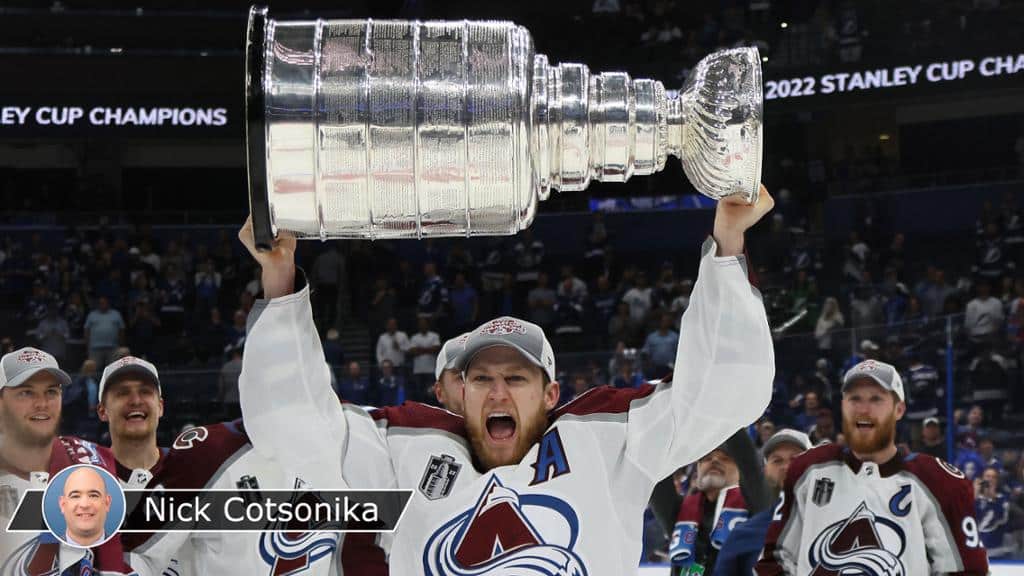 TAMPA — The emotion poured out after the final horn. Nathan MacKinnon caught Erik Johnson in his arms after the Colorado Avalanche clinched the Stanley Cup with a 2-1 win in Game 6 of the Stanley Cup Final at Amalie Arena on Sunday, then tackled Johnson to the ice.

They lay there together, embracing amid the discarded sticks and gloves as their teammates celebrated behind the net. Eventually, MacKinnon pulled Johnson to his feet, and they embraced again. Johnson had hit his head, MacKinnon had cut his hand, and they’d never felt better.

The whole journey flashes in front of your eyes at moments like this.

MacKinnon was 8 or 9 years old when his father made a hockey card of him. On the back, MacKinnon wrote that one day he wanted to be drafted by the Avalanche and play with Joe Sakic. He had a poster of Sakic in his bedroom.

The Avalanche selected MacKinnon with the No. 1 pick in the 2013 NHL Draft when Sakic shorlty after Sakic became general manager, and the center won the Calder Trophy as the NHL rookie of the year in 2013-14 at 18 years old. Johnson and Gabriel Landeskog were among his teammates then.

After losing in the Western Conference First Round in 2014, Colorado missed the Stanley Cup Playoffs three years in a row, finishing last in the NHL with 48 points in 2016-17. Johnson, Landeskog, Mikko Rantanen and J.T. Compher were among MacKinnon’s teammates then.

The Avalanche lost in the first round in 2018, then lost in the second round three years in a row. A different kind of emotion poured out after the final horn a year ago after they won the Presidents’ Trophy as the NHL’s top regular-season team but lost to the Vegas Golden Knights in six games.

“There’s always next year,” MacKinnon said then. “It’s all we talk about, I feel like. I mean, I’m going into my ninth year next year and haven’t won [bleep], so I’m just definitely motivated.”

Finally, it’s next year now. No more waiting. The Avalanche went 16-4 in the playoffs, never trailed in a series, had 10 comeback wins and defeated the two-time defending champions.

MacKinnon had 24 points (13 goals, 11 assists) in 20 games, including six points (two goals, four assists) in six games in the Cup Final. He had a goal, an assist, seven shots, two hits, two blocked shots and a takeaway Sunday, while winning 65 percent of his face-offs.

“You could tell how bad he wanted it,” Sakic said. “You heard his interview last year after we lost to Vegas, and you saw how disappointed he was. He’s just an amazing person, amazing hockey player. He wants to win so bad, and I’m excited for him. Maybe now he can relax and enjoy the summer a little bit.”

MacKinnon said the adversity in the past made the Avalanche stronger this year. It helped them in the second round, when they failed to eliminate the St. Louis Blues at home in Game 5 and did it on the road in Game 6, and in the Cup Final, when the same scenario played out.

“That scar tissue, it builds up,” MacKinnon said. “It gives you that character. Without those growing pains, we wouldn’t have won it this year, so it feels great.”

MacKinnon was at a loss for words after the team picture, as the doors to the ice opened for media and family members.

“It’s hard to describe, honestly,” MacKinnon told reporters on the ice. “The best part is just sharing it with your teammates, your brothers. I’m excited to hug my family. It’s just unbelievable. Thanks, guys. I’m just going to go celebrate, so appreciate it.”

MacKinnon skated off, found his family and took a picture with the Cup. Then he helped his father, Graham, hoist it.

“That was unreal,” Graham said. “I mean, that’s a dream come true.”

Asked if the Cup was as heavy as he expected, Graham laughed.

“Just kind of get flashbacks from my whole childhood, my whole life,” he said. “It feels amazing.”

MacKinnon is from Cole Harbour, Nova Scotia, the same hometown of Sidney Crosby, the No. 1 pick of the 2005 NHL Draft, who won the Cup with the Pittsburgh Penguins in 2009, 2016 and 2017. MacKinnon and Crosby are friends and training partners.

Asked if Crosby would come to his Cup party, MacKinnon said: “He better. I’ve been to two of his, so he owes me a party.”

The only problem, as Johnson can attest, is that MacKinnon might celebrate too hard.

“I might get fat as [bleep] right now, so I don’t know if we’re going back to back,” MacKinnon said. “But I’m going to enjoy it, for sure.”

Jersey kits: Go pro or no?

Hockey season is rolling around and it’s time again to bring out the jerseys and display them proudly at games, office... read more